Cleaning and preparation the information for use, such as punctuation removal, spelling correction, lowercasing, stripping markup tags (HTML,XML)

Search for text patterns, validate emails and URLs, capture information, and use patterns to save development time.

a phonetic algorithm for indexing names by sound, as pronounced in English. The goal is for homophones to be encoded to the same representation so that they can be matched despite minor differences in spelling. The Soundex code for a name consists of a letter followed by three numerical digits: the letter is the first letter of the name, and the digits encode the remaining consonants. Consonants at a similar place of articulation share the same digit so, for example, the labial consonants B, F, P, and V are each encoded as the number 1. Wikipedia

The correct value can be found as follows:

Tokenization is the process of demarcating (breaking text into individual words) and possibly classifying sections of a string of input characters. The resulting tokens are then passed on to some other form of processing. The process can be considered a sub-task of parsing input. A token (or n-gram) is a contiguous sequence of n items from a given sample of text or speech. The items can be phonemes, syllables, letters, words or base pairs according to the application.

The collective name for a set of language modeling and feature learning techniques in natural language processing (NLP) where words or phrases from the vocabulary are mapped to vectors of real numbers.

Process that converts a list of words to a more uniform sequence. .

Stemmers remove morphological affixes from words, leaving only the word stem. Refers to a crude heuristic process that chops off the ends of words in the hope of achieving this goal correctly most of the time, and often includes the removal of derivational affixes.

Lemmatization usually refers to doing things properly with the use of a vocabulary and morphological analysis of words, normally aiming to remove inflectional endings only and to return the base or dictionary form of a word, which is known as the lemma . If confronted with the token saw, stemming might return just s, whereas lemmatization would attempt to return either see or saw depending on whether the use of the token was as a verb or a noun. The two may also differ in that stemming most commonly collapses derivationally related words, whereas lemmatization commonly only collapses the different inflectional forms of a lemma. Stemming and lemmatization | Stanford.edu NLTK's lemmatizer knows "am" and "are" are related to "be."

Word embeddings have become widespread in Natural Language Processing. They allow us to easily compute the semantic similarity between two words, or to find the words most similar to a target word. However, often we're more interested in the similarity between two sentences or short texts. Comparing Sentence Similarity Methods | Yves Peirsman - NLPtown

A type of statistical modeling for discovering the abstract “topics” that occur in a collection of documents. Latent Dirichlet Allocation (LDA) is an example of topic model and is used to classify text in a document to a particular topic

Training the language model in BERT is done by predicting 15% of the tokens in the input, that were randomly picked. These tokens are pre-processed as follows — 80% are replaced with a “[MASK]” token, 10% with a random word, and 10% use the original word. The intuition that led the authors to pick this approach is as follows (Thanks to Jacob Devlin from Google for the insight):

Mary Phillips is a 45-year-old woman with a history of diabetes. She arrived at New Hope Medical Center on August 5 complaining of abdominal pain. Dr. Gertrude Philippoussis diagnosed her with appendicitis and admitted her at 10 PM. </pre>

[NAME] is a [AGE]-year-old woman with a history of diabetes. She arrived at [HOSPITAL] on [DATE] complaining of abdominal pain. Dr. [PHYSICIAN] diagnosed her with appendicitis and admitted her at 10 PM. </pre>

Sandy Parkinson is a 34-year-old woman with a history of diabetes. She arrived at Mercy Hospital on July 10 complaining of abdominal pain. Dr. Myron Prendergast diagnosed her with appendicitis and admitted her at 10 PM. </pre>

One of the major forms of pre-processing is to filter out useless data. In natural language processing, useless words (data), are referred to as stop words. A stop word is a commonly used word (such as “the”, “a”, “an”, “in”) that a search engine has been programmed to ignore, both when indexing entries for searching and when retrieving them as the result of a search query.

(POST), also called grammatical tagging or word-category disambiguation, is the process of marking up a word in a text (corpus) as corresponding to a particular part of speech,[1] based on both its definition and its context—i.e., its relationship with adjacent and related words in a phrase, sentence, or paragraph. A simplified form of this is commonly taught to school-age children, in the identification of words as nouns, verbs, adjectives, adverbs, etc. 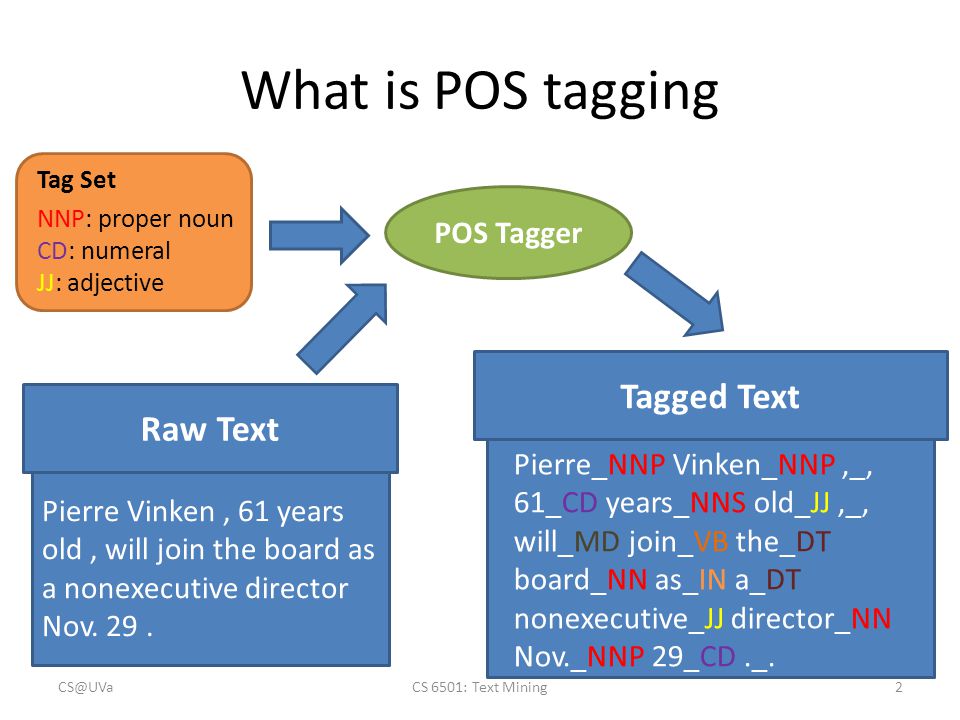 The Hierarchy of Ideas (also known as chunking) is a linguistic tool used in NLP that allows the speaker to traverse the realms of abstract to specific easily and effortlessly. When we speak or think we use words that indicate how abstract, or how detailed we are in processing the information. In general, as human beings our brain is quite good at chunking information together in order to make it easier for us to process and simpler to understand. Thinking about the word “learning” for example is much simpler that thinking about all the different things that we could be learning about. When we memorise a telephone number or any other sequence of numbers we do not tend to memorise them as separate individual numbers, we group them together to make them easier to remember. Hierarchy of Ideas or Chunking in NLP | Excellence Assured

(also known as entity identification, entity chunking, sequence tagging, part-of-speech tagging, and entity extraction) is a subtask of information extraction that seeks to locate and classify named entities in text into pre-defined categories such as the names of persons, organizations, locations, expressions of times, quantities, monetary values, percentages, etc. Most research on NER systems has been structured as taking an unannotated block of text, and producing an annotated block of text that highlights the names of entities.

task of extracting semantic relationships from a text. Extracted relationships usually occur between two or more entities of a certain type (e.g. Person, Organisation, Location) and fall into a number of semantic categories (e.g. married to, employed by, lives in). Relationship Extraction

Coreference is the fact that two or more expressions in a text – like pronouns or nouns – link to the same person or thing. It is a classical Natural language processing task, that has seen a revival of interest in the past two years as several research groups applied cutting-edge deep-learning and reinforcement-learning techniques to it. It is also one of the key building blocks to building conversational Artificial intelligences.

Natural-language understanding (NLU) or natural-language interpretation (NLI) is a subtopic of natural-language processing in artificial intelligence that deals with machine reading comprehension. There is considerable commercial interest in the field because of its application to automated reasoning, machine translation, question answering, news-gathering, text categorization, voice-activation, archiving, and large-scale content analysis.

NLU is the post-processing of text, after the use of NLP algorithms (identifying parts-of-speech, etc.), that utilizes context from recognition devices (automatic speech recognition [ASR], vision recognition, last conversation, misrecognized words from ASR, personalized profiles, microphone proximity etc.), in all of its forms, to discern meaning of fragmented and run-on sentences to execute an intent from typically voice commands. NLU has an ontology around the particular product vertical that is used to figure out the probability of some intent. An NLU has a defined list of known intents that derives the message payload from designated contextual information recognition sources. The NLU will provide back multiple message outputs to separate services (software) or resources (hardware) from a single derived intent (response to voice command initiator with visual sentence (shown or spoken) and transformed voice command message too different output messages to be consumed for M2M communications and actions) Natural-language understanding | Wikipedia

NLU uses algorithms to reduce human speech into a structured ontology. Then AI algorithms detect such things as intent, timing, locations, and sentiments. ... Natural language understanding is the first step in many processes, such as categorizing text, gathering news, archiving individual pieces of text, and, on a larger scale, analyzing content. Real-world examples of NLU range from small tasks like issuing short commands based on comprehending text to some small degree, like rerouting an email to the right person based on basic syntax and a decently-sized lexicon. Much more complex endeavors might be fully comprehending news articles or shades of meaning within poetry or novels. NLP vs. NLU: from Understanding a Language to Its Processing | Sciforce A corpus (plural corpora) or text corpus is a large and structured set of texts (nowadays usually electronically stored and processed). In corpus linguistics, they are used to do statistical analysis and hypothesis testing, checking occurrences or validating linguistic rules within a specific language territory. 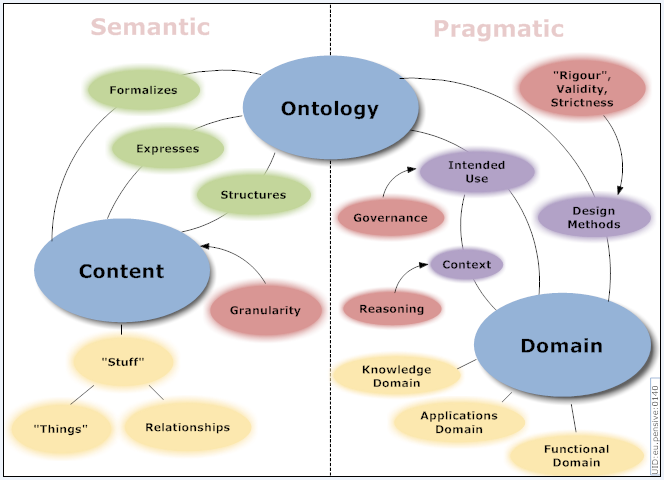 Identifying whether one piece of text can be plausibly inferred from another - automatic acquisition of paraphrases, lexical semantic relationships, inference methods, knowledge representations for applications such as question answering, information extraction and summarization.

identifies shallow semantic information in a given sentence. The tool labels verb-argument structure, identifying who did what to whom by assigning roles that indicate the agent, patient, and theme of each verb to constituents of the sentence representing entities related by the verb.

Sapir Whorf Hypothesis - How language shapes the way we think 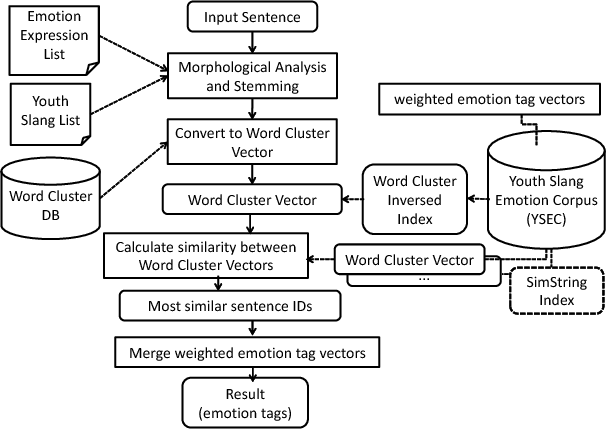 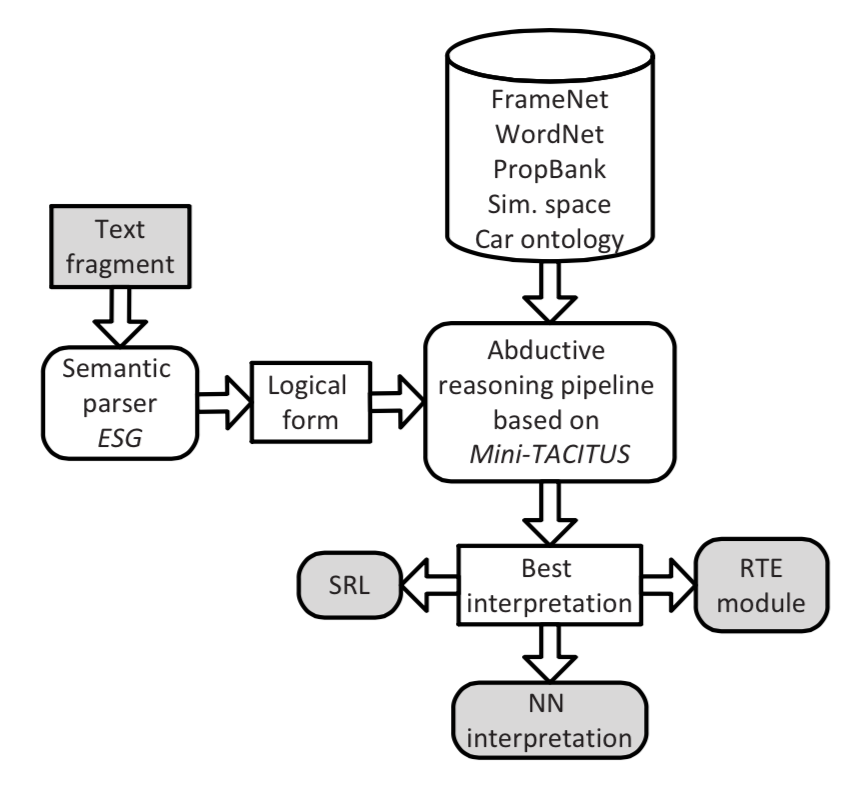